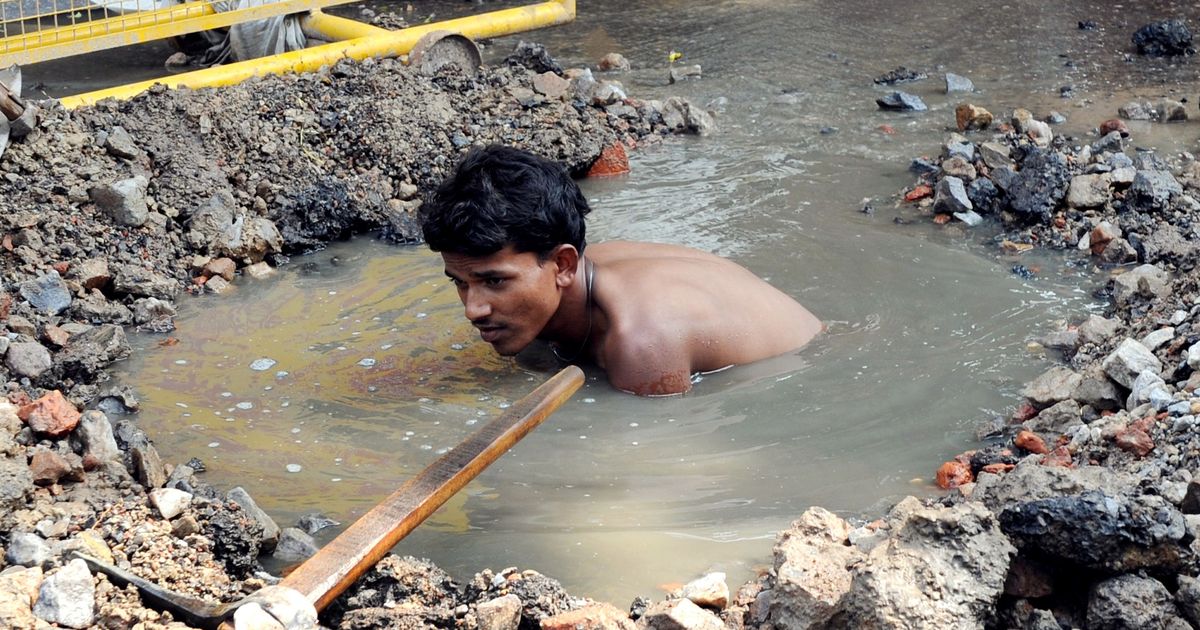 The Problem of Manual Scavenging

Manual Scavenging is the act of cleaning sewers or removal of waste from toilets with little to no safety equipment. In this process, untreated human excreta are removed from pit latrines or bucket toilets employing only the use of buckets or shovels by hand.

Manual scavenging is inhumane and an act of violation of the law. It is a social issue deep-rooted in Indian society to this day finding use and strength in the orthodox notions of casteism and sexism.

“In no country, people are sent to gas chambers to die”, the Supreme Court of India remarked in September 2019 regarding the issue.

Despite laws ranging as far back as 1993 outlawing the practice, it is still rampant in many parts of the country, claiming thousands of lives every year. Taking up the issue, the Supreme Court lambasted the government for not providing safety gears to these workers and not doing enough to address the problem.

The COVID-19 pandemic has made matters worse and raised valid concerns about the lives of the sanitation workers categorized as essential workers by the government. This further presses on the need for active change in the policies around sanitation and swift mechanization of the process while bringing in place effective policies for reemployment and de-stigmatization of the workers in this area.

Facts and figures of Manual Scavenging

According to the 2011 Census, 24.6 crore households in India has 26 lakh insanitary toilets with states such as Andhra Pradesh, Assam, J&K, Maharashtra, Tamil Nadu, Uttar Pradesh and West Bengal account for more than 72 per cent of them. It also showed that around 1,80,657 people engaged in manual scavenging for a living, while huma rights group on the issue have pegged much higher figures.

Further, while UP claims to have eradicated 70 percent of manual scavenging, it is the only state to report 1.5 lakh incidents of it. As per a study (link – https://cdn.cseindia.org/attachments/0.20857500_1550484536_SFD_factsheets_booklet_66_cities.pdf) done by Centre for Science and Environment in 2018, there were around 18000-19000 manual scavengers present in 66 cities of Uttar Pradesh, with a fourth of them working with urban local bodies (ULBs) either on contract basis or on special requests. The report also highlighted the abysmal standard of the safety protocols followed in the process.

Who are the people predominantly engaged in manual scavenging?

As with most repressive occupations, manual scavenging too finds itself concentrated within the Dalit communities, adding to the centuries long traditions of their oppression and social discrimination.

Belonging to such marginalized communities, these people have little income to support them, pushing them to take up these jobs to make ends meet. This is taken advantage of the managers of the ULBs who secretly employ them to empty septic tanks in inaccessible places and to save money on machines and complying to appropriate safety protocols. Within Dalits, the ‘dom’ sub-community is the one predominantly engaged in manual scavenging.

While it is common knowledge that this demeaning job is predominantly thrust on the Dalit community, it is a little known fact that among them, it is mostly women who make up the larger share at about 95%. Women are paid less than men and so are preferred by most households with dry latrines, adding to the marginalization of the Dalit women.

Even their children face discrimination and social exclusion. This often results in them dropping out from schools and getting sucked into the trap of this filthy profession perpetrating a vicious cycle which is very difficult to get out of.

Causes and effects of manual scavenging

Apart from the social stigma, manual scavengers also find themselves exposed to a range of toxic gases and pathogens. It is an extremely hazardous profession, with added dangers due to the lack of proper safety equipment – they are usually only provided with a rope and bucket to manually clean manholes. They get cuts, injuries, skin and eye irritation, skin and respiratory tract infections, malaria, dengue, tuberculosis and other illnesses. It is estimated that more than 600 sewer workers die every year.

The COVID-19 pandemic has further worsened the situation.

Even in the times of a global pandemic, they lack adequate safety kits, with little to no access to sanitisers and masks. Most of them live in informal settlements of slums, which are tightly packed with little access to clean water, and in most cases, do not have access to toilets and are forced to use community toilets. This adds to the risk of the spread of the virus and other diseases.

Laws on manual scavenging in India

Recognized as a disgrace to human dignity, it is still blatantly perpetuated in the Indian society.

While India has banned manual scavenging in 1993 and reinforced its provisions through the 2013 Prohibition of Employment as Manual Scavengers and Their Rehabilitation Act, it continues on by and large, despite the provisions for up five years of imprisonment for hiring people as manual scavengers.

In 2020, the government had proposed an amendment to the 2013 law, mandating the use of machines to clean sewers and septic tanks. It also proposed changing the word ‘manhole’ with ‘machine-hole’ in all government documents.

The proposal also stressed the need to install a round-the-clock nation helpline to report violations of the act. While currently the violation of this act is punishable by up to five years of imprisonment or a fine of up to ₹5 lakh or both, the amendment bill proposes to increase these figures.

But these practices are deemed to not be enough by many social activist groups working for the liberation of manual scavengers. They claim that they are surface reforms which are easy to bypass and do not target the dehumanising traditions of social discrimination, the ineffectiveness of infrastructure, the blatant denial of the very existence of the problem, lack of proper rehabilitation and reemployment programmes, the social stigma around the profession, and the lack of incentive for strict implementation of reforms that lie at the root of this issue. They even fail to account for the Hela and Halalkhor Muslim sub-communities who are just as much oppressed by this profession as the Dalits, with women again bearing the larger brunt.

One of the major causes of the perpetuation of this problem is the prevalence of subsidised built-in toilets with small tanks requiring frequent manual cleaning. Even the toilets constructed under the Prime Minister’s Swatchh Bharat programme have single pits or twin-pits for containment, making them unfit for machine cleaning leading to further dependence on manual cleaners. With the eventual overflowing of the toilets, people are again forced to resort to open defecation.

What needs to be done to end manual scavenging

The present approach lacks on many fronts. Most of them are focused on rehabilitation of workers, that too mainly male workers, with little focus on the majority of female manual scavengers. The loans and subsidies provided to the workers also work more as an encouragement to continue this demeaning profession than to successfully switch from it, while the discrimination continues as is. These oppressed families deserve larger financial assistance in the form of grants, rather than loans, such as inclusion in the BPL list and related various benefits thereof, housing under Indira Awas Yojana, etc.

An issue like this needs to be tackled on multiple front and requires the dedicated efforts of a number of stakeholders allowing for a top to bottom level involvement. It needs effective policy reforms with strict laws in place for their implementation. It also needs a shift in societal outlook, which is heavily reliant on awareness creation both among the victims regarding their rights and options as well as among the general masses who still look at them as less than human. It also requires active advocation  and the support of the organizations and corporates who consider social reformation their social responsibility.

Project Garima by Tata Trust which was initiated with the release of an impactful video (link – https://youtu.be/c13be-R6aAg) by the chairman of the Tata Group, Ratan Tata, himself. Aimed at providing safe and humane working conditions to the workers, it also encouraged people to participate in a waste segregation campaign with the tag #TwoBinsLifeWins.

Robot Badicoot by the Raheja Corp, where the Greater Hyderabad Municipal Corporation was presented with a manhole-cleaning robot “Bandicoot” (link – https://www.business-standard.com/article/pti-stories/ghmc-introduces-robotic-manhole-desilting-machine-119110600372_1.html), in an effort to end manual scavenging.

(Find out what Tapas Foundation can do for you as your CSR implementation partner. Click Here)

Many social reform organizations are also working to better the lives of manual scavengers in India. These include the likes of Jan Jagriti Aawahan Bahuuddeshiya Samiti (JJAS) (link – https://janjagritisewasamiti.org) which works by providing childcare facilities to manual scavengers and other marginalized communities in Nagpur, and Jan Sahas Organization (link – https://jansahas.org) which has rehabilitated over 31000 manual scavengers over the past 16 years, helping them transition through financial support and targeted employment programmes.

World Environment Day: The Time To Act is Now